Catalysts for Social and Economic Change

Map the System is a global competition which encourages university students to utilise systems thinking to address current social, economic, and environmental challenges. Map the System prioritises a systems approach because “there are increasing numbers of students across the globe interested in entrepreneurship for systems-change – there are hack-a-thons, start-up weekends, and business plan competitions – all asking students for their solutions to social and/or environmental problems through new enterprises. But social transformation doesn’t happen in a silo, nor does it come from one person or one great idea. And often students are proposing solutions to problems that they have no lived experience of, and don’t fully understand.” Systems thinking is introduced as a valuable methodology because it allows the participants to recognise the complexity of the issues they are dealing with and to grapple with the structural and social factors that have created the challenge.

In 2022, the UCT team won Map the System 2022! Over 1000 teams, from 45 universities across the world took part in the competition. The UCT team of Janine Rutsch, Makhadze Baloyi and Lauren Fray, Finclusive, focused on "Financial Exclusion in South African Mortgage Provision", and identified that ‘missing middle’ households are being financially excluded from the mortgage system, fueling further inequality in South Africa.

Their project findings highlight access to financing as key for homeownership, which in turn enables wealth accumulation and upward mobility. These benefits culminate in greater income equality, which has huge societal impact. Their work encourages the development of innovative financial instruments to fill the gap in the market and de-risk and reduce perceived risk of this gap in the market. 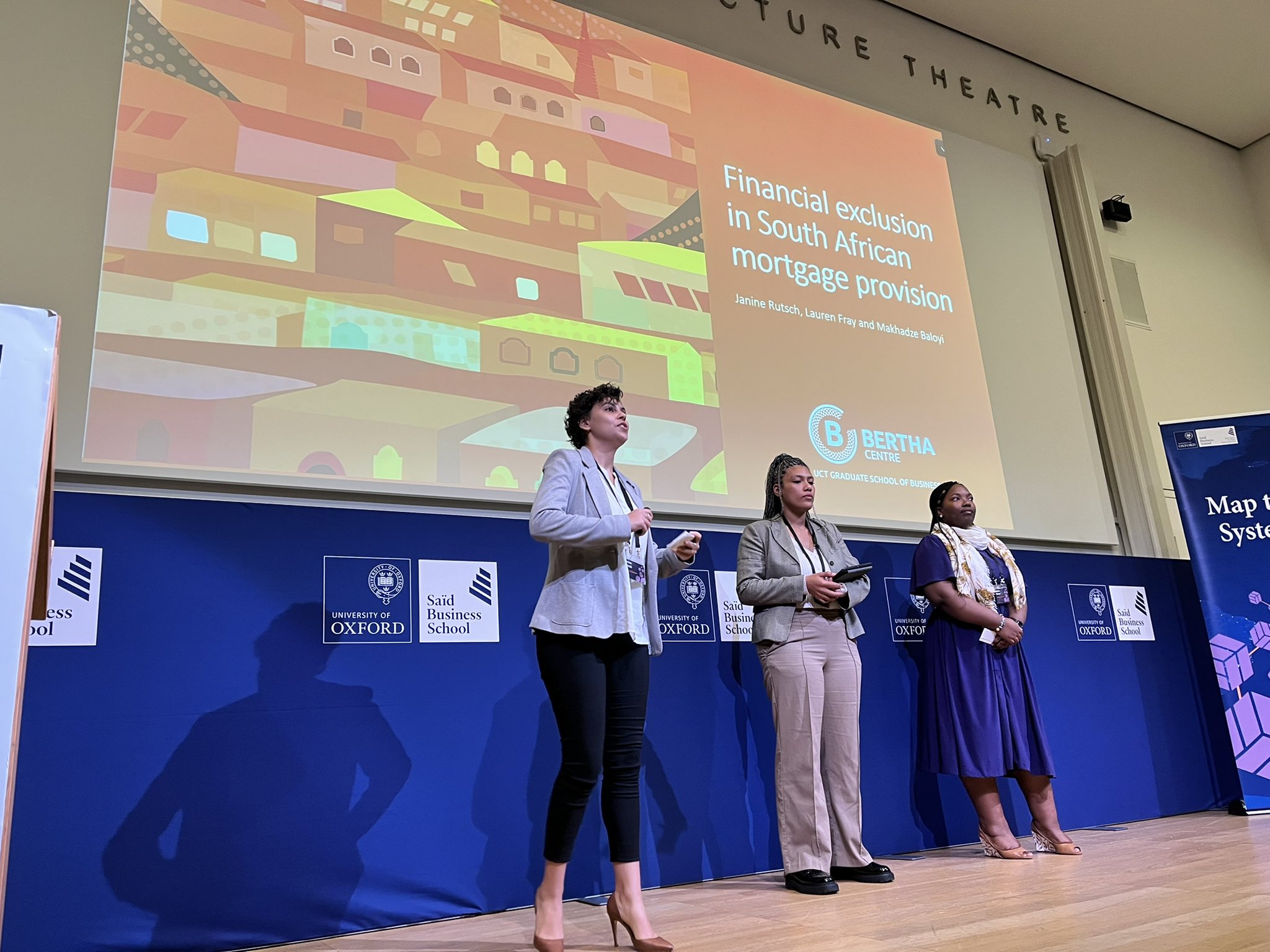 In 2020, twenty-seven teams entered the UCT leg of the competition. Four semi-finalists were selected to present their research and the UCT winning team included Zaakir Essa, Catherine Torrington, Sophie Gerbers and Min'entle Mthelelo. The team presented their work on "Why women-owned businesses in South African townships fail". On being selected as the UCT winning team Zaakir Essa noted that “Map the System made us realise that we rarely understand the complexity and dynamics of social problems if we do not fully examine them. Breaking away from academia made us realise that there is often a stark divide between academia and the real world, it was an incredible experience.”

In 2019, forty-nine teams entered the UCT leg of the competition with topics covering drought prevention in Cape Town to child healthcare in South Africa. The winning UCT team, Mas'Funde, included Tlhogi Dube, Prashant Venkat, Mabothe Maleka, Phalo Maurice-Mopp and Thuba Mzila. The team, with the support of the Bertha Centre and Investec, went on to represent UCT at the global Map the System competition in Oxford competing against thirty-three other teams. Their research topic looked at "Education in South Africa and how prepared teachers are for the classroom environment". 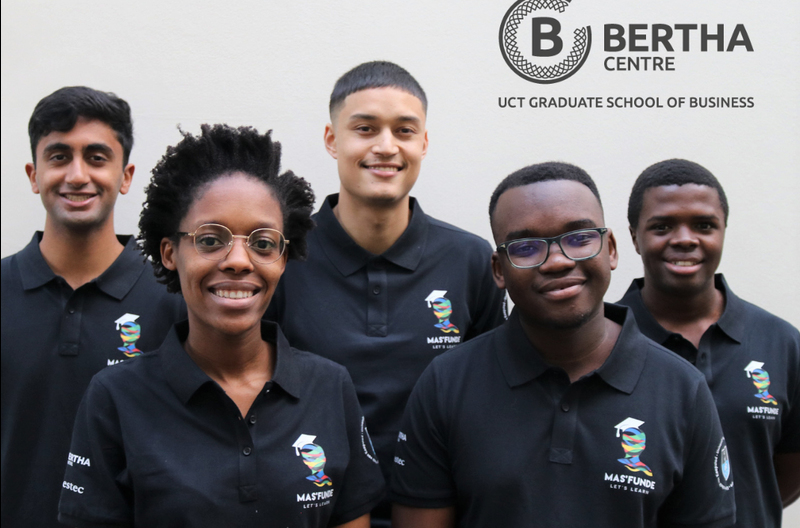 In 2018, the UCT team included Nyasha Chimhandamba and Runako Mzwidzwa who went on to represent UCT at the global Map the System Competition where they competed against fourteen other teams. The team, FemWash, focused their research project on water and sanitation. Specifically, the team examined how in many developing country contexts there are significant barriers to accessing water, hygiene and sanitation and unpacking how this impacts menstrual hygiene management. FemWash researched the South African experience and highlighted the challenges faced by women in rural areas, informal settlements and townships that do not have the infrastructure for sanitation and water access.

In 2017, and for the first time, UCT competed with a team by Rowan Spazzoli, Louis Buys, and Tsakane Ngoepe who went on to be selected as a runner-up finalist in the global competition. The team presented their research on “Crime Prevention and Community Safety in Cape Town by AllSafe", which focused on unpacking the community policing environment in Cape Town as well mapping out the systematic issues surrounding the coordination, communication and information sharing around crime prevention and personal safety. 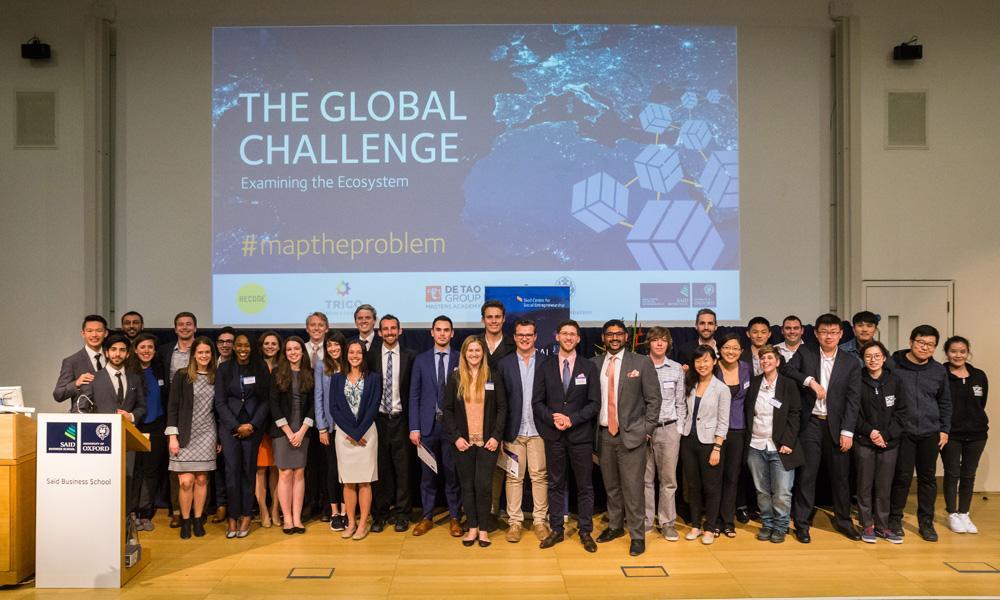